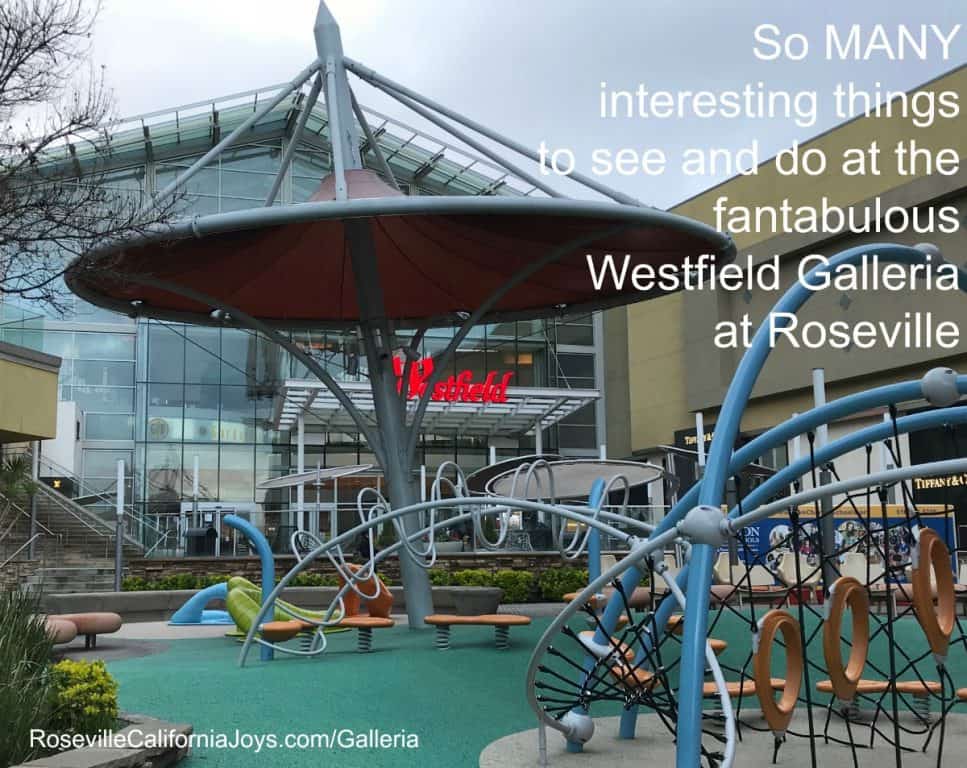 A Look Back at the Fantabulous Westfield Galleria at Roseville

03/25/2018 Restaurants, Roseville Shopping, Things To Do No Comments
Thank you for sharing...

Changes In Tech and In Roseville We often talk about how tech things keep changing. Computers, programs, internet, social media, etc. Thanks to those changes, I headed for the mall today. But as I wandered around the fantabulous Westfield Galleria at Roseville CA – or, as we often nickname it, the Galleria Mall Roseville CA – this morning, I was immediately reminded of all the changes this huge Roseville shopping center has experienced in the past 18 years. Would you believe it! I still remember watching them build it! It was so much fun to visit when it first opened. No more “long” (20 minute) drives to the Sunrise Mall in Citrus Heights, unless we wanted something specific like an affordable movie date or a store the Galleria stores in Roseville CA didn’t offer. For that matter, no more “longer” (24 minute) drives to the Arden Fair Mall in Sacramento. Unless, of course, we wanted a movie date with more choices coupled with time spent at one of our fave book stores. Nope, now we could stay in our sweet city of Roseville California and enjoy exciting shopping and eating at our very own Westfield Galleria at Roseville CA. And that name is one of those changes. Originally, it was called the Galleria at Roseville, though I usually called it the Galleria Mall in Roseville. 😉

You can read more of the history of the mall at Wikipedia, but some of the high points include, “In 2000, Urban was acquired by Rodamco North America, N.V, a Netherlands-based real estate investment company. The center was subsequently sold to the Westfield Group in 2002 with the dissolution of Rodamco. The center was renamed “Westfield Shoppingtown Galleria at Roseville. The Shoppingtown moniker was dropped from all Westfield properties in 2005.” Thus we now enjoy the name, “The Westfield Galleria at Roseville CA.” 🙂

Unlike memories of my first two malls from Southern California, one of which is now defunct, the Galleria Mall has enjoyed several updates, upgrades, and exciting changes. Some came with time. Others came after a dreadful arson at the Galleria. For the most part, all of the changes have been positive, leading to what we have now – the lovely, vibrant, exciting and interesting Westfield Galleria at Roseville. Definitely one of the many fun things to do in Roseville California! One of the not-positive changes for me was losing a favorite book store, Borders. Sadly, they are now gone everywhere. Happily, we can still enjoy Barnes and Noble.

Fun Things to Do In Roseville in the Westfield Galleria

After popping into the Apple Store at the Galleria in Roseville CA at 8:15 in the morning, to get my battery updated, I enjoyed wandering around the Galleria while it was mostly empty. Not yet open for delightful Roseville shopping, it reminded me of the many lovely walks I had enjoyed with my mom and dad before the mall opened each day, thanks to the Galleria opening its doors to walkers at about 8 or 9 daily in conjunction with a Kaiser healthy walking program. This article explains it well. But I would like to point out that my folks were doing it at the Galleria Mall starting around 2001, if not 2000. 🙂 Back then, there was usually quite a large crowd – especially on cold or hot days. Half the walkers were elderly seniors and those of us with them. The other half were moms with strollers – often pregnant with another precious baby to come. Great exercise for all! And a lot of fun walking as well as chatting with old and new friends. (Not to mention fun window shopping!) Mega Kudos to ALL the malls who offer this healthy option, including our great Westfield Galleria at Roseville! While wandering around today, I took a bazillion photos, like usual. I discovered so MANY new-to-me stores. Can you tell real estate, sweet elderly parents, and adorable grandkids keep me too busy to get there often. :).  Nowadays, when I get there, it’s usually for the Apple store, Pluto’s in the Promenade – so MANY great salads and other dishes. Soon, I suspect I will visit occasionally to share the awesome playground with adorable grandkids! So MANY fun options. In fact, SO MANY is a great way to describe this huge mall. Thanks to all the changes and expansions, per Wikipedia, “the expanded property surpassed Arden Fair Mall as the largest mall in the Sacramento metropolitan area both in size and number of stores.” And they’re not done yet! Not only that! Consider all the stores found at the Westfield Galleria at Roseville PLUS all the stores and restaurants right across the street (East Roseville Parkway) at the lovely Fountains Shopping Center Roseville CA as well as at the shopping centers across Galleria – the Creekside Town Center, home to Barnes and Noble, Michaels, Best Buy, and more!; The Ridge at Creekside which includes AT&T, Chipotle, Olive Garden, Mimi’s and more; and Creekside Plaza with BJ’s and SmashBurger +. Not only that. You can also find so much more shopping all around that area. Head towards Douglas a wee bit to the Green Acres awesome nursery. Just past that, the beloved Trader Joes.  Head the opposite direction to Five Star and Fairway streets and you’ll find another bonanza of shopping and eating delights from Costco to Home Depot to Kohls and SO MANY more! As you can see, this area is a powerhouse shopping area that attracts tons of shoppers all year long! Of course, online shopping is having an impact on all these malls and stores. Still and all, anytime I have popped into the Westfield Galleria at Roseville, it’s always busy – even on Mondays! And they’re not done changing yet. According to Fox40, it’s time for a 2018 refresh that “will include new retailers, restaurants and amenities.” That explains the areas I spotted today with some new flooring going in.

Sight-seeing at Westfield Galleria at Roseville

Homes Around Westfield Galleria at Roseville

As I left the Galleria this morning, I noticed the Pinnacle at Galleria apartments right across the street. Wow! You could live there and walk to the Galleria, the Fountains, and more! Hmmmm, that could get expensive if you’re a shopaholic! Might be safer to rent at one of the apartments a bit further away on Gibson, near my Keller Williams real estate office. Or one of the lovely homes in the nearby neighborhoods. 🙂 The Westfield Galleria at Roseville is, indeed, a fantabulous place to shop, to eat, to take kids or grandkids to play, to enjoy a healthy walk, to have fun at the various holiday and seasonal activities, and SO MANY OTHER things to do. If you’ve never been, you definitely need to check it out. And if you’ve not been recently, come enjoy seeing the fun changes. And for all of us, we’ll look forward to even more exciting and interesting and fantabulous changes to come!

P.S. Curious what all is there? Here’s a photo of the directory – much bigger than when they first opened! 🙂 P.P.S. Wondering what Roseville homes for sale might be found near the Westfield Galleria at Roseville? CLICK HERE. 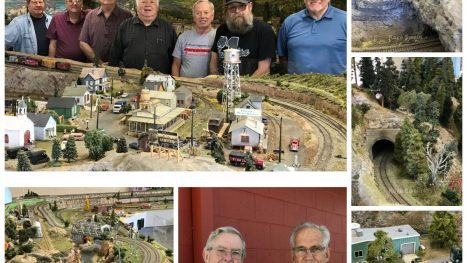 Retirement Living Roseville Things To Do

A Fun Visit to the Roseville Roundhouse Model Railroad Club 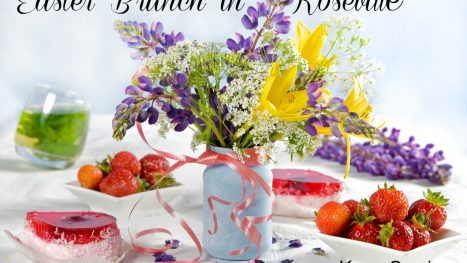 Fun Spring Things to Do in Roseville CA Hi, and WELCOME to Roseville California Joys. I appreciate your visiting! I love to share fun holiday and seasonal happenings here, along with a sampling of the great options we enjoy in Roseville California - from parks for our kids and grandkids to lovely stores to delicious restaurants to 55+ active senior living options and so much more. And guess what, you can even get this FREE in your email. Check it out right below this!

When this happens, it's usually because the owner only shared it with a small group of people, changed who can see it or it's been deleted.
View on Facebook
· Share

CONGRATS TO ROSEVILLE - AGAIN WINNING ANOTHER AWARD FOR BEING A GREAT CITY - www.roseville.ca.us/news/what_s_happening_in_roseville/one_of_the_best_places_to_live_in_the_u__s_"Roseville was again named one of the best places to live in the United States,ranking 21st overall and highest in California by Livability.com , "offering residents a little bit of everything." Here's the full list of their awards! - www.roseville.ca.us/cms/One.aspx?portalId=7964922&pageId=18085228We do live in a great city! 😄 😄 😄 ... See MoreSee Less

An update on the Mosquito Fire ... See MoreSee Less

The local skies will be busy this weekend as the California Capital Airshow returns Friday thru Sunday with spectacular air and ground performances at Mather Air Force Base.
View on Facebook
· Share